Lisa Gordon never dreamed she’d end up celebrating 30 years of owning a business in Taos when she came for a Halloween party in 1979. She’d been traveling with no real agenda, but she immediately felt comfortable in Taos and decided to stay.

It wasn’t long after that she opened Copy Queen, Taos’ first copy service business. Since her father was in the copy business, her ears perked up when she started hearing Taoseños complain about the difficulty of finding a place to make copies. 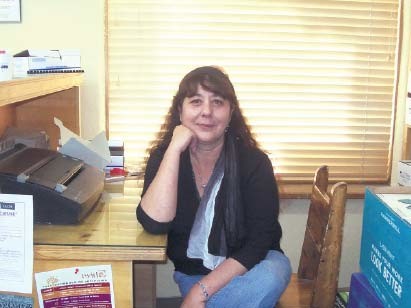 “My father has been in the industry since the original manufacturing of the first copy machine,” Gordon explains. “Toner was in my blood.” Her father helped with the initial investment, but he was less than enthused. “He didn’t understand Taos at all,” Gordon says. “The things that were important to him were like, ‘What’s the population?’ I said, ‘I’m going to stay here anyway, so if I don’t see this plan happening for me, I’ll probably be a waitress.’ And he nearly gagged, and said, ‘Let’s give it a try.’” Starting with a mere $5,000, Gordon initially rented all her equipment.

“If it failed, it was just a matter of turning back in all the equipment; it was no big deal,” Gordon says. She opened her doors on San Geronimo Day in 1980, and the rest is history. “It proved to be a really needed thing for the community,” says Gordon. “I never imagined 30 years.” She adds that her father loves it here now, and visits often from New Jersey. Gordon believes that it’s great customer service that’s made her success, and is grateful to have employees that contribute to that.

“I can’t say it enough that my employees are spectacular,” she says. Of her two employees, Natalie Struck has been with her 14 years, and Nicole Romero, who handles computer graphics, has been there six years. “I know that when a job matters to someone because it’s intricate, like a legal thing where everything has to be exactly right, that’s where our expertise comes in,” says Gordon. “I have a really good reputation in terms of difficult, high quality jobs.” But she values the small projects too, and adds, “That one single copy is just as important to me as those big jobs that are coming in from the attorneys or the town of Taos.”

This process entails using ink-jet printing to make prints from digital sources. Archival quality inks are used to print images onto surfaces like canvas or photobase paper, resulting in higher quality reproductions than with other methods. Gordon enjoys doing projects for artists, and says she gets to see a lot of unusual images.

“The people here just make my job so interesting,” she says. “I’m very grateful to live in a wonderful community like this and be able to support myself.” She believes in giving back to the community, and says, “You have to always remember that it’s your community that’s supporting you and allowing you to keep your doors open.”

Susan Carpenter Sims and Christopher Madrid write to create awareness of the critical role entrepreneurship plays in our community.

To learn about the many services available for businesses or to make suggestions, call the Taos Chamber at (575) 751-8800.